Amazon has never shied away from making weird gadgets that require a little bit of explanation, but the new Amazon Glow could take home the Stranger’s award for several years. It is a videoconferencing device that also incorporates a table projector.

In its never-ending quest to bring entire families into its ecosystem, Amazon has announced a new smart video chat speaker / device called Glow. It is intended for children to video chat with others using Alexa-enabled devices in a controlled environment.

The idea is that young children quickly get bored with video chats and walk away, leaving their distant parent staring at a blank screen. So, Amazon Glow can project games, books, or puzzles onto a table that kids and their parents (or grandparents) can play together.

Amazon says it is “reinventing the way children can connect with family and distant friends.”

Kids can share their “virtual space” in real time using the Amazon Glow app. People on the other end can use Alexa on an Android or iOS device, and Amazon will bring compatibility with Fire OS soon.

The Amazon Glow, not to be confused with the Echo Glow, a smart kids’ light, packs a vertical smartphone screen in a giant speaker box that looks like a comically tall cell phone from the 90s. It has a 8 inch LCD screen and projects a touch area approximately 19 inches in diameter.

Summary of the news:

Disclaimer: If you need to update / change this article, please visit our help center.

For the latest updates Follow us on googIe New

Next "Email is a zombie that keeps rising from the dead": Inbox Zero's never-ending chase | E-mail 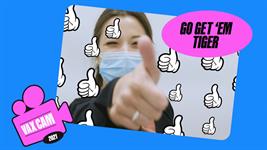